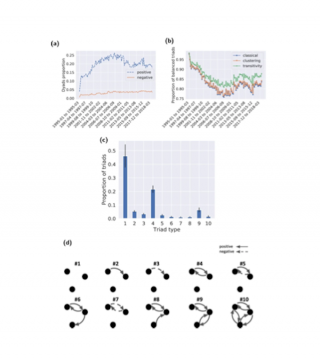 Omid Askarisichani's paper with the title of "The 1995-2018 global evolution of the network of amicable and hostile relations among nation-states" just appeared in the journal of Nature Communications Physics. The paper is co-authored by all-three MURI PIs from UCSB (Ambuj K. Singh, Francesco Bullo & Noah E. Friedkin), marking the interdisciplinary impact of the research.

Studying the evolution of the network of amicable and hostile relations between countries allows powerful insights into global events such as the origin of wars, economic collapses, and the result of political elections. In this paper, the authors study 23+ years of event data for international appraisals. Uses a convex optimization scheme and time-varying Markov models, they find that the evolution of the corresponding network is consistent with structural balance theory; and triadic interactions evolve towards balanced relationships while pinpointing major international conflicts. The authors further buttress their findings with an analysis of two Bitcoin trust network datasets. All data and analyses are publicly available.